Posted by Rosemarie Powell on 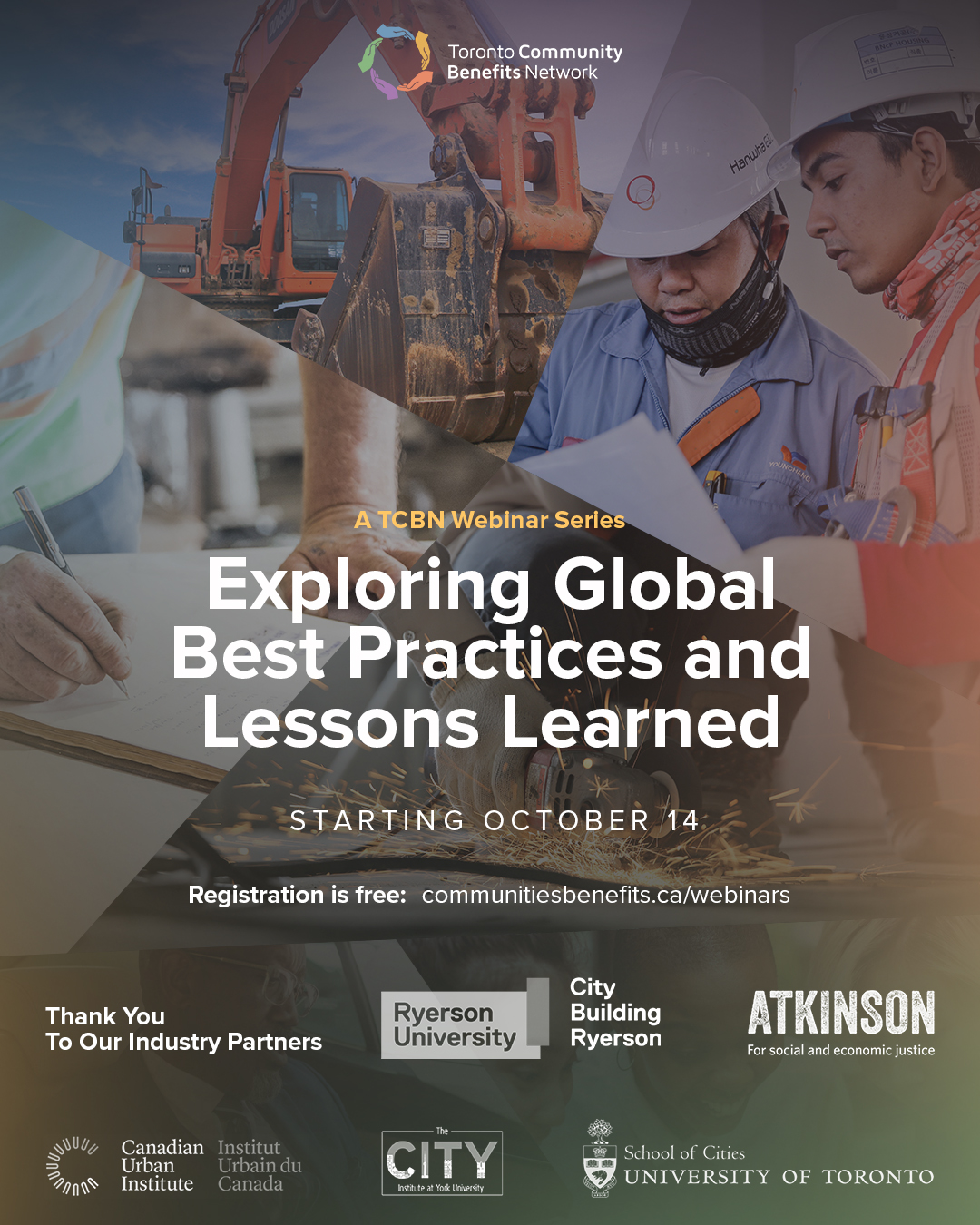 This webinar will feature speakers with experience in the US, UK and Canada who will be sharing more about their role in developing Community Benefits Agreements, equitable approaches to infrastructure and development and share lessons learned

Long-lived enough, she remembers the first time someone in Toronto said, there this this thing called a Community Benefits Agreement in Vancouver, we should find out more,” Diane Dyson has worked in public policy for decades. Her work has always focused on opportunity and equity. She joins us tonight as Senior Director, Research at the Canadian Urban Institute, a city-building organization that pushes for a resilient, inclusive and just urban future from coast to coast to coast

Irene Kerr has an accomplished track record with over 20 years of experience in project delivery and operations in the transportation sector. Ms. Kerr leads a driven and diverse team at BCIB, and she’s proud that the organization has been recognized as one of BC’s Top Employers. Ms. Kerr also sits on the board for SkillPlan, a nationally recognised leader in workforce development programs.

Ms. Kerr has been involved in many different projects, from sports, transportation, infrastructure, and project delivery. Prior to joining BCIB, Ms. Kerr was President and CEO of the Crown corporation, Transportation Investment Corporation. Ms. Kerr has also served as Vice President of Games Services, Toronto 2015 Pan and Parapan American Games and Vice President Services, Vancouver 2010 Winter Olympic and Paralympic Games. In these roles, Ms. Kerr demonstrated her skills in managing complex, multi-stakeholder projects, while also developing strong relations with stakeholders.

Lauren Jacobs is the Executive Director of the PowerSwitch Action, a national network of local power building organizations that bring together community, labor, faith, racial justice, and environmental justice movements into powerful coalitions. Originally born and raised in New York City, Lauren has lived in cities across the US where she has organized textile, janitorial, security, and restaurant workers into powerful multi-racial formations. For 25 years she has developed and executed effective strategies to build long-term power with working people via local and national campaigns. A believer in the transformational possibilities of multi-racial, feminist democracy, Lauren’s dreams, vision and analysis have watered many movement spaces.

Neil is Senior Fellow for the Global Advancement of Community Wealth Building at the Democracy Collaborative.

He was previously the Chief Executive of the Centre for Local Economic Strategies (CLES)- the UK national organisation for local economies.

Neil is an economics of place specialist.  He has an academic background in economic geography.  However, over the last 25 years has gained multi-disciplinary knowledge, skills and experience, having collaborated with a range of local, state and national governments and agencies, in UK, Europe, Asia, US and Australasia.

At present he is driven by the perfect storm of economic, social, environmental and democratic challenges. In this, he is focussed on thinking through and applying progressive economic approaches including Community Wealth Building in a range of localities.  His focus at the moment is localities within the US and Scotland- where he is a Community Wealth Building Adviser to the Scottish Government.

Roxana joined LAANE in 2001 and served as Deputy Director for six years until assuming the position of Executive Director in February 2012.  Roxana has been instrumental in the expansion of LAANE’s work and impact over the past decade. She has also played a leading role in developing LAANE’s community organizing department, mentoring dozens of young organizers and creating one of the region’s most effective organizing and advocacy programs.  Prior to joining LAANE, Roxana served as economic development deputy to L.A. City Council member Jackie Goldberg. Roxana began her work life as an organizer for the Hotel and Restaurant Employees Union in Las Vegas and Los Angeles. A graduate of Yale, she is bilingual in English and Spanish. She lives with her husband and two children in Mt. Washington.