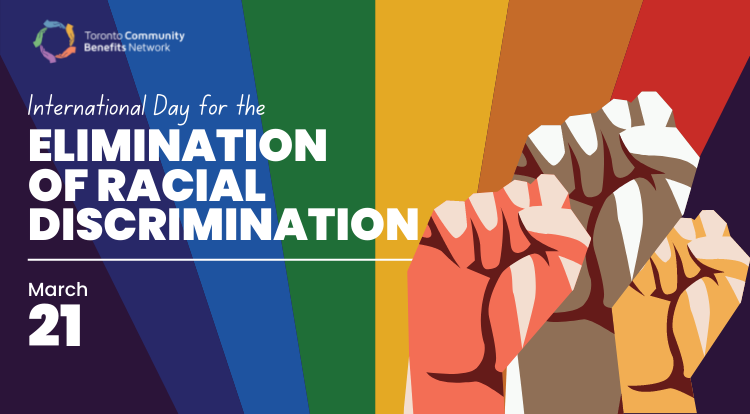 TCBN International Day for the Elimination of Racial Discrimination

On March 21, the Toronto Community Benefits Network recognizes the International Day for the Elimination of Racial Discrimination (IDERD). IDERD was proclaimed in 1966 by the United Nations General Assembly in response to what is known as the Sharpeville massacre or the Sharpeville tragedy. With its 1966 proclamation, the UN General Assembly called on the international community to increase efforts to eliminate all forms of racial discrimination.

The Toronto Community Benefits Network and its supporters from across Ontario call on our governments to address community concerns around major upcoming transit infrastructure projects, and ensure they realize their full transformative potential.

As stakeholders directly involved in the funding, planning, and delivery of four large-scale priority transit projects across Toronto, we call on you to address the following community concerns.

Current plans for the four new transit projects include significant impacts on main streets, public spaces, parks, green spaces, and local businesses. Also, we know from experience that environmental burdens associated with major transit infrastructure projects, including pollution, noise and vibration, have disproportionately been borne by low income communities, indigenous communities and communities of colour. We must restore the ability to protect our environment and address environmental racism.

Unfortunately, Metrolinx’s decision-making lacks transparency and engagement with impacted communities. At least five neighbourhood improvement areas (as identified by the City of Toronto[1]) will be affected by these projects during construction and beyond. Direct, ongoing and meaningful engagement with impacted communities is needed to co-design plans for neighbourhood improvements/enhancements in ways that address local concerns and environmental impacts.

Community Benefits Agreements (CBAs) are a vital accountability mechanism to ensure economic and racial justice through specific commitments to good jobs and opportunities for underrepresented groups, including Black and Indigenous workers, People of Colour, and women. It is a proven approach to maximize the public return on investment in infrastructure spending, transforming local communities to stronger, more inclusive economies.

Community Benefits Agreements must be established in project agreements, on a project-by-project basis, with at least 10% minimum equity hiring thresholds, local and social procurement requirements, disaggregated reporting of data, and a project level Community Benefits working group to ensure accountability. While we are encouraged by the Provincial governments announcement that a 10% minimum equity target will be included on projects moving forward, we are concerned that such mandates can be removed with no transparency.

In 2021, eight nooses were found at four construction sites in the City of Toronto. Two of these incidents occurred at Metrolinx’s Eglinton Crosstown LRT construction sites.[2] Black workers have also reported being harassed, assaulted, and feeling unsafe while working on construction projects in Toronto.

Metrolinx and Infrastructure Ontario must ensure a safe and healthy environment free from hate, harassment, and bigotry for all workers on these projects, especially Black workers. All contractors must be required to conduct anti-racism training, with a focus on anti-Black racism, for all workers, supervisors, managers, and executives, including any subcontractors, and to provide a project-specific anti-racism strategy and incident response plan, with an emphasis on ensuring contractor evaluation and compliance.

Over the last few years, we have seen the clock rolled back on efforts to eliminate racial discrimination. New legislation in the Province of Ontario has gutted laws and regulations under the pretext of speeding up decision-making processes on large infrastructure projects. In the process, previously existing checks and balances protecting local communities and allowing them to address social, environmental and economic concerns have been lost. The resulting lack of accountability, transparency, and meaningful engagement most impacts equity-deserving communities.

In recognition of the International Day for the Elimination of Racial Discrimination on March 21, we call on local elected representatives, the Province of Ontario and its ministries, Metrolinx and Infrastructure Ontario, to work with community groups in a meaningful way to ensure major upcoming transit infrastructure projects also help create more inclusive, prosperous and just communities.